No matter how many monitors get posted on retail websites, they all really seem much the same -- contrast ratios are largely-inflated marketing hype, latency differentials seem irrelevant, and really, the only solid demarcation of product differences is the screen size and panel type. That's what this guide is for.

There's a lot more to monitors than that - and although the choices may feel by-and-large identical, there are minute differences in terminology that can make a world of difference in your monitor purchase.

In this monitor specifications guide, we'll discuss whether or not contrast ratios matter, cover LCD vs. IPS vs. LED LCD differences, and explain important monitor specs.

TFT LCD – TFT is an abbreviation for Thin Film Transistor Liquid Crystal Display. The transistors mentioned in the Active Matrix section (below) are very small, low-power devices that enable us to create the flat, low power consumption monitors we have today. The other piece of the low-power, low-heat, thin monitor puzzle is the liquid crystal. If you've ever seen a light shined into a prism, you know that it can produce a rainbow - although not scientifically accurate, Pink Floyd's famous "Dark Side of the Moon" cover is a good visual representation of this concept. Hold that thought. Now imagine that you could precisely control that prism to only show the wavelength (or color) of light that you wanted seen. We can use voltage to control liquid crystals to do something very similar to that.

IPS – If you've ever viewed an LCD monitor from the side, you might have noticed a slight blur and distortion of color in the image. Enter the IPS (In-Plane Switching) panel. When regular LCDs bend light, think of it passing through a crystal that is perpendicular to the screen. This crystal arrangement causes light to scatter and distort a bit inside the screen, making viewing from a severe angle unsatisfactory. IPS changes this by placing its crystals parallel, or "in plane," with the screen. Please keep in mind that this is a basic description, but it does provide a reasonable understanding of the benefits and technology behind the panel type -- you can view IPS panels from multiple angles and view the same result; similarly, IPS panels often boast increased picture quality (but suffer from greater latencies) - this picture improvement is a result of the technology used (reduced light scattering improves quality).

Active Matrix – This refers to the technology by which a transistor and a capacitor "actively" work in conjunction to tell pixels what to do. Transistors are like switches - they turn on and off - and capacitors hold charge for a limited time. In an active matrix display, think of a mathematics matrix with rows and columns. The screen switches on one row at a time (in sequence). While the row is active, each column's transistor is also switched on. When the row and column are on at the same time, the voltage tells the pixel what color to be is sent. That charge, representing the correct color, is held until that row and column are addressed at the next refresh. The pixels stay busy, hence the name "active matrix."

We've been asked how to measure monitor screen size before -- it's pretty simple: Monitor screen size is measured diagonally (from corner-to-corner), not top-to-bottom or side-to-side. Some companies will underhandedly list the frame or bezel as part of this measurement. Just to be on the safe side, look for a "viewable size" number, if it is offered. 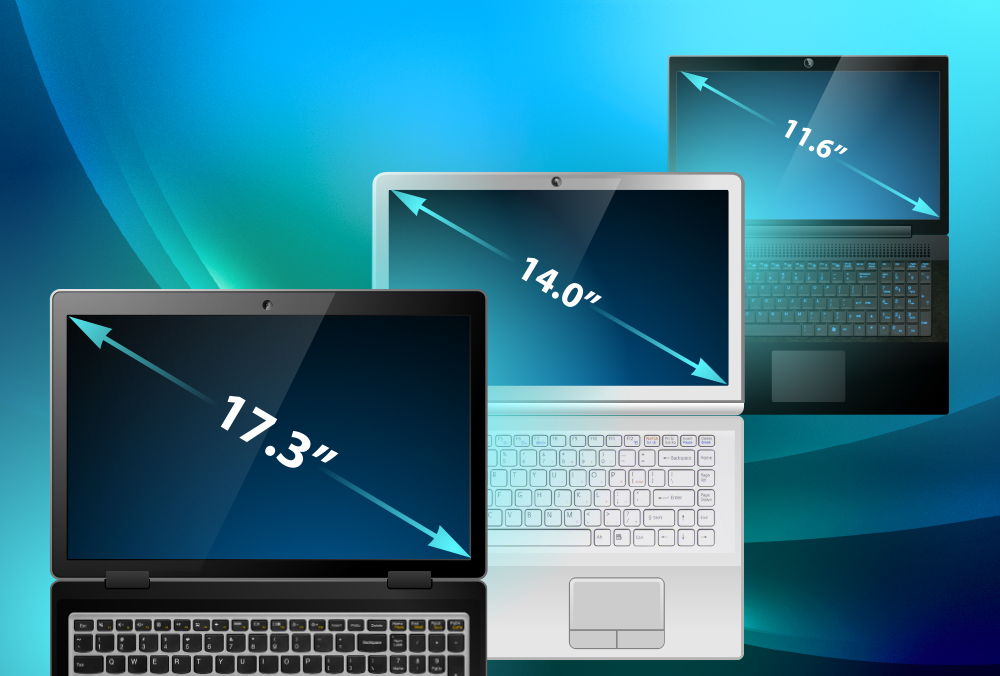 This is the part of the monitor that surrounds the viewable area; it is normally composed of plastic. Larger bezels are undesirable for multi-monitor arrays, because they'll create a larger unviewable gap in between displays. This is why some companies will charge significantly higher for "zero-bezel" displays.

This number is related to the aspect ratio. The most common number thrown around today, 1080p, comes from this statistic. A monitor with 1920x1080 resolution would fit the 1080p monitor. The 1920 is literally the number of pixels the monitor produces horizontally on the screen, while the 1080 is the number for the vertical dimension (in pixels). If you're wondering, the "p" stands for progressive scan, a presentation technique, as opposed to "i" (as in 1080i), which is defined as an interlaced output. Like most stats, with resolution, higher is often better and will produce a clearer picture with more definitive features.

There are two choices when it comes to backlight, and the market is very quickly turning it into only one; the older choice is CCFL, or Cold Cathode Fluorescent Light, the newer choice is LEDs. For CCFL displays, imagine the fluorescent light bulbs you find in a grocery store ceiling, but in a tiny size. These lights are crammed in to the bottom and top of your display, then made to reflect and shine outward through the previously-mentioned liquid crystal.

The dominant technology in use by most manufacturers now is the LED backlight, or light-emitting diodes. This technology utilizes a small, thin, even lower-power, brighter set of LEDs arranged in a matrix that shines forward from the back of your screen. Rather than lighting from the edges of the screen, LED backlights will often illuminate the entire back panel of the display, making for a more proportionate diffusion of light. Additionally, LEDs are smaller than cold cathode tubes, meaning monitors can be even skinnier.

This is one of the least-known monitor statistics. Think of an old-fashioned window with a wooden "t" in it, dividing the window into four small panes. The pixel pitch then would be the thickness of the wood separating the panes. The thicker it is, the easier your eye will pick up the separation. The thinner the better, in this instance, as it will create a more immersive and less disrupted viewing experience.

This is how many times per second the LCD monitor can alter the same pixel, which reflects how many times per second the picture is sent to the monitor. The higher the number the better, but going past 240Hz is not very practical as there are very few sources that produce signal at that rate. There is also DSP interpolation, but that's another matter.

Common monitor refresh rates are 60Hz and 120Hz. In modern technology,120Hz monitors are often used with 3D Vision technology or other 3D products, as it will allow each eye to see at 60Hz. The refresh rate is also the cap of the FPS (or framerate) when utilizing vertical sync technology in game options; adaptive v-sync - available on most modern cards (nVidia's 301.42 drivers activated this feature for some older cards, too) - is a bit different, though.

This is the amount of time a pixel takes to change from black-to-white and then back-to-black again. The time is measured in milliseconds. The catch here is that most companies don't list their black-white-black, time but rather their gray-to-gray time -- this can potentially misrepresent a monitor's performance when comparing multiple monitors which measure by differing standards. Gray-to-gray (GTG) is a similar measurement, but it's faster (because the color range is smaller), which makes the manufacturers seem like they're giving you more for your money. Lower is better, but check for GTG vs. black-white-black measurements. If one monitor uses black-white-black and is slightly slower than a monitor using gray-to-gray, it's possible that the only reason they're different is the form of measurement. Response time has largely become a marketing specification for this reason.

This is a measure of how many candelas per square-meter your monitor can output. Candelas are the SI unit for light, so the more that you have exiting your screen, the easier it will be for you to view. This is an especially important statistic for projectors or users who are outdoors with portable devices. Higher is better; 250-300 cd/m2 is average.

This statistic measures the number of shades a monitor can produce between its brightest white and its darkest black. ASCR, DCR, ACM, and DCF are all acronyms you'll encounter when referencing this number. Please ignore these and search for the native contrast ratio, which should follow all of these crazy big numbers. The native ratio is usually 1000:1. The higher the first number (1000 in this example), the better the actual CR. Dynamic ratios should not often be taken into account when deliberating a purchase.

This is how many degrees from the plane of the monitor you can still see the picture. Most monitors will have a horizontal viewing angle of around 176 degrees. This means you can almost stand beside the screen and still see the picture. This is primarily important when you're having a LAN event (MLG, where we interviewed pro gamer CranK, is a good example) and the people sitting at the edge of the room still want to see the picture. In other words, if you're a computer enthusiast and you're always sitting in front of the screen, this is largely an unimportant statistic. Higher is better.

This is the number of colors or gradients of light that a monitor can display. It is based on a power of two. A monitor that has the ability to display 16.7 million colors (the standard) is said to have 24-bit color. This is because 2 raised to the 24th power is approximately 16.7 million. Most PC monitors fall into the 16.7 million category, but IPS panel types far exceed this, making them ideal for graphic design and true-color presentation. Higher is better.

Analog RGB means that the monitor can interpret analog data in the Red, Green, Blue format. Digital input type means that the screen is ready for DVI and HDMI connection. Most monitors will have compatibility for both types, though higher-end machines will only support the digital format.

Tilt is ergonomically important so that you're not causing undue neck strain by craning to see your display. On that note, some monitors also feature a telescoping feature, which makes monitor height also adjustable. Rotation is useful when doing professional or academic sharing, as it helps display ideas (fighting the viewing angle problems referenced above).

The ability to be mounted according to the VESA standards, a mounting/bracketed standard in the industry.

This is a great option if you have a cable connection or want to pick up the local HD broadcast, sending it straight into your monitor and bypassing TVs. 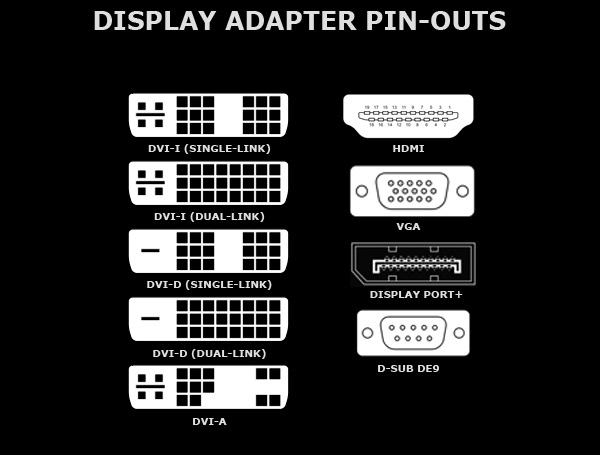 VGA – This is the traditional blue port that sends/receives an analog Video Graphics Array signal to the monitor. It is generally considered lower quality than the digital connections, but most users can hardly tell the difference.

DVI – The Digital Video Interfaces come in three major categories and two subcategories within the major ones. DVI-D is for true digital display, where a dual-link version allows the highest quality and a single-link offers slightly reduced quality. DVI-A is for connecting from a DVI source to an analog display, like an old CRT monitor. DVI-I is the connector that bridges the gap. It also features a single- and dual-link type like the DVI-D. This connector means your monitor is a boss and can handle either DVI-A or DVI-D signaling.

HDMI – The High Definition Multimedia Interface is the most common connector in the media marketplace today. Its versatility is what wins its place. The 'multimedia' bit means that it transmits both digital audio and video across the same cable. If you don't like cable clutter and you don't need an audiophile setup, then a single cable going straight to built in monitor speakers may be the way to go.

DP+ - Display port plus is the latest edition to the monitor connector space. It's much like HDMI in its ability to support different signals on the same cable. One note is that a USB signal can travel through the connector in addition to the video and audio.